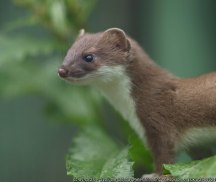 On Tuesday 23rd January, Amy King of Scottish Natural Heritage and Bea Ayling of the RSPB talked and answered questions at ICIT, Stromness,  about the escalating problem with stoats on Orkney.

Many folk may not see the harm in stoats – they are quite attractive little creatures – but, the problem is – they predate birds, particularly ground-nesting birds. As Orkney has quite a lot of these, the arrival of stoats, could spell disaster for the birds, and possibly other native wildlife, such as voles – the Orkney Vole is specific to Orkney and we want to hold on to it!

Amy and Bea spoke to a gathering of staff and students from ICIT, plus a smattering of folk from Aquatera and EMEC.

SNH and the RSPB are currently focusing on the areas where the stoats which are presently on the Orkney Mainland, could, possibly, cross over to other islands, extending the problem even further.

Some of you may have seen the stoat traps, positioned discreetly in the countryside. They are lethal traps – but only stoats can be caught in them. They are weighted so that mice, voles etc. don’t register and are not caught. Rats, however, do get caught, which probably pleases the farmers as much as the stoats being disposed of.

Over 100 stoats have been dealt with so far, which doesn’t sound like a lot, but it does make a dent in the population and help prevent their spread to the smaller islands (stoats can swim).

The presentation at ICIT was part of the ongoing Orkney Native Wildlife Project, and there are other events happening around Orkney.

You can keep up with the project at their Facebook page and you may also be interested in the weekly blog called the ‘Stoat Snippet’. A questionnaire seeking people’s opinions on the stoat problem in Orkney is available online here.

And finally, here’s a link to the SNH report on the risks posed by stoats to Orkney’s native wildlife: Stoat (Mustela erminea) on the Orkney Islands – assessing the risks to native species