All Aboard The Jellicoe Express

We know only too well in Orkney what being at the tail end of a supply chain can be like. Supermarket shelves can very quickly empty when there is a delay – usually weather related – to foodstuffs being transported from south. Many a military campaign has faltered when supply chains became stretched and  could not keep up with those in the front line.

The role of railways to transport men and armaments became of vital importance during the Boer war. 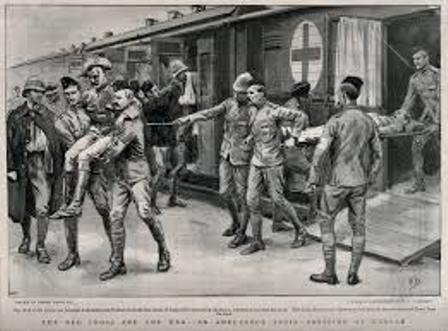 The logistics of moving large numbers of men within the British Isles was extremely complicated.

By the end of the war over 460,000 horses and mules had been transported from Britain and Ireland to the Front. Motorised vehicles, still in their infancy were also sent over as was some rolling stock from the railways. The only way to move large numbers of military personnel within Britain was to use the railways.

Robert Foden gave a fascinating and extremely well researched talk on Tuesday the 12th of February on the role of the Jellicoe Express. To a packed Orkney Vintage Club meeting in the King St Halls he told the story of the vital role the railways played in the supply chain. 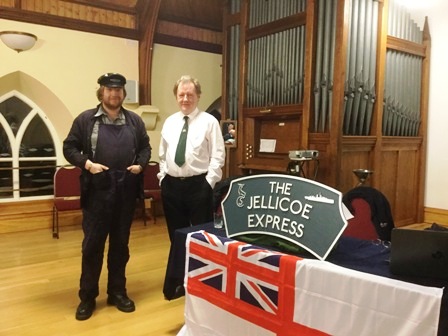 The Jellicoe Express aka ‘The Misery Express’ – official name The Euston to Thurso Naval Special – ran from February 1917 to April 1919.

On the 5th of August 1914 the Government took control of the running of the railways in Britain. At the start, transporting men and munitions from one end of Britain to the other was rather chaotic. There was a shortage of staff as men enlisted to fight the war to end all wars and women were recruited for some tasks. The railway structure was under stress as passenger trains were being used. Military personnel were being stranded, trains were overcrowded and mail was not being delivered but accumulating in large piles away from its final destination.

The British Grand Fleet was stationed at Scapa Flow, Orkney. 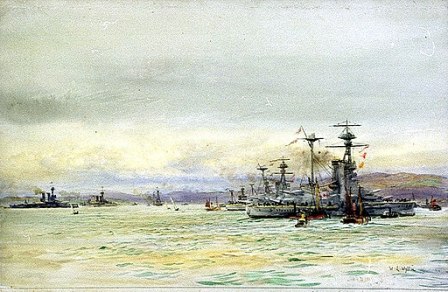 Inverness became a central hub for ensuring that mail and men could reach Scrabster for their onward journey to ships anchored in Scapa Flow. And , of course, similarly when on Leave and journeying south.

Captain Rowley was put in charge of Transport at Inverness on 19th of August 1914. Hotels were requisitioned for the use of military personnel. The  Defence of the Realm Act meant that the north of Scotland (including Orkney ) became a military area. If you wished to travel you required documentation. The delays in moving military personell around became increasingly problematic and by the 15th of February 1917 , Captain Rowley had organised the Euston to Thurso Naval Special – the Jellicoe Express (so named unofficially after Admiral of the Fleet John Jellicoe) 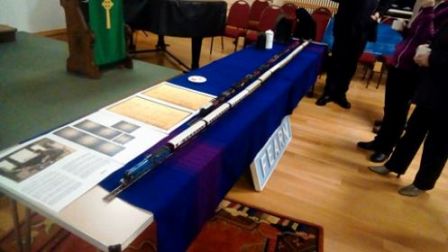 Model of the Jellicoe Express (A Foden)

The train, a double locomotive, consisted of up to 14 carriages including sleeping quarters for officers and some compartments for prisoners. With such a long journey food was supplied for those travelling north to take up their deployment. Bagged teas were supplied to officers and at Inverness there was a sit down breakfast often catering for up to 460. An official refreshment stall at Dingwall served 134,864 cups of tea in this time.

On its route from Euston the train stopped only a few times to take on water ( steam trains in those days) and to allow men to be transported to other bases. Despite it being an incredibly long journey (700 miles)  it kept very much to time.. It had a winter and summer timetable. In the summer leaving Euston at 6.30pm to arrive in Thurso the next day at 3.30pm.  Comparing it to travel today by the same means there is very little difference in time taken.

In the winter snow was a problem and on 12th of January 1918 in a dreadful blizzard the Jellicoe Express and a rescuing snow plough became stuck a few miles outside of Thurso. The next day men walked into Thurso. It was a week before the line was cleared which meant running a train to Invergordon instead from where men were shipped north.

Delivering the mail to those serving on board the vessels of the Grand Fleet in Orkney was an extremely important function of the Jellicoe Express with sorting taking place on the northern part of the journey.

Once at Scapa Flow the  Imperious became the Post Office where mail was sorted and delivered to the awaiting vessels. Something like 50,000 letters and parcels a day were sorted 80 million in total being delivered over the period.  It provided banking facilities and also delivered English and Scottish newspapers – hot off the press  which were sold, profits going to the war disabled.

The last run for the Jellicoe Express was on 30th of April 1919 until it was resurrected for duties in World War 2.

This was a fascinating story and particularly relevant given Orkney’s commemorations last year ( 1918- 2018 Orkney Images Marking the Ending of World War I ),this year of the Scuttling of the German Fleet in 1919 in Scapa Flow and the work being done to record the wrecks. (#Scapa100 at Stromness Museum) 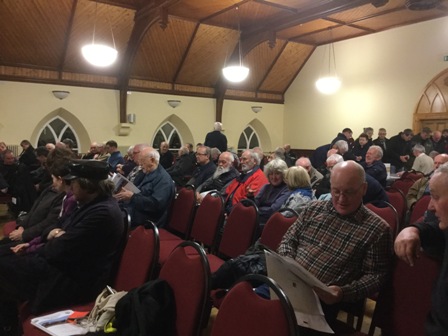 The Vintage Club starting to fill up the King St Hall

If travelling by train look out for the Blue Plaques commemorating the Euston to Thurso Naval Special at some railway stations.