Scottish Environment LINK – the umbrella group representing 38 green organisations – wants the Scottish Government to honour the SNP’s manifesto commitment and introduce an ambitious Circular Economy Bill that will increase rapidly the amount of materials reused and recycled by Scottish businesses and households.

“We need to move rapidly to a more circular economy because the climate and ecological emergencies we face are partly driven by what and how much we consume.

“The Scottish Government’s promised Circular Economy Bill is an opportunity to set us firmly on a course towards reductions in the resources we use by keeping as much material as possible circulating in the economy, rather than chucking it out as waste. Our current approach where products have a short lifespan and are seen as disposable is creating mountains of waste for future generations as well as exhausting valuable natural resources.” 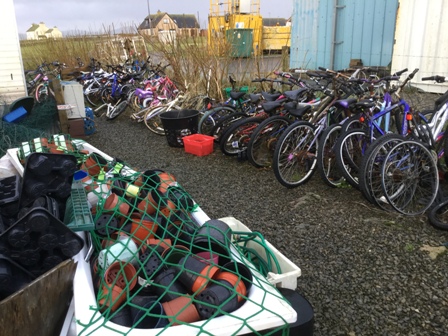 “The move to a more circular, less wasteful economy can bring Scotland an economic boost by making businesses more efficient and delivering important social benefits such as cleaner air and water, as well as protecting our wildlife.”

“Reducing waste is not only about recycling, it’s about designing a whole system so that producers of things like fridges, computers, tyres and mattresses take responsibility for what happens to them at the end of their lives.  Applying the principle of Producer Responsibility would mean products are designed so they that can be easily repaired or broken down to make new products.”

“It is much to the credit of the Scottish Government that they have adopted the idea of a circular economy and followed through with some specific initiatives, for example banning plastic cotton buds and the Deposit and Return Scheme. But there is much, much more to do – these measures will only cover a drop in the ocean of plastics pollution”.

The group will take their concerns to the Scottish Parliament.