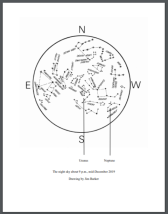 The Moon will be Full on December 12th, New on December 26th.   It will pass near the Hyades Open Cluster in Taurus on December 10th and 11th.  At the December New Moon there will be an annular solar eclipse, in which the Moon’s shadow will cross from the Arabian peninsula to Indonesia, with a partial eclipse over much of southern Asia.

The planet Mercury is in the morning sky after greatest elongation on November 28th, rising about 5.45 a.m. at the beginning of the month, and disappears by the middle of December after passing Mars.   Shortly before that, in mid-December Mercury and Mars will be nearly in line with Spica, the brightest star in Virgo, above both of them to the right.

Venus is low in the evening sky, much brighter in December, setting about 6 p.m. with Saturn, much fainter, above and to the left, and Jupiter below.   Venus is near the Moon again on December 28/29th.

Mars in Virgo rises about 5 a.m. in December, passing the double star Zubelgenubi on December 12th.   The Moon appears near Mars on December 23rd, and Mars will be rising two and a half hours before the Sun by the end of the month.

Jupiter in Ophiucus disappears from view in mid-December, reaching conjunction with the Sun on December 27th.

Saturn in Sagittarius sets about 6 p.m. in December, passed by Venus on December 10/11th.   The Moon is near Saturn on December 28th and 29th.

Neptune in Aquarius sets at about 11 p.m. in December.

The Geminid meteor shower from the asteroid Phaeton  (the only ones not to originate from a comet)  peak on December 13/15th, but will be spoiled by moonlight this year.

Duncan Lunan’s new book “From the Moon to the Stars”, a collection of space travel stories old and new relating to the Moon and Project Apollo, is now available from the publishers at https://othersidebooks.wordpress.com, as well as on Amazon or through booksellers;  details of that and his other books are on Duncan’s website, www.duncanlunan.com