“”The Daisies will commemorate Rick’s memory and our time together.” 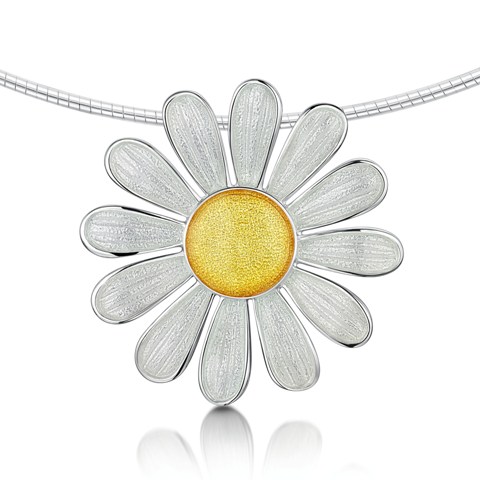 Orkney-based jewellery designer Sheila Fleet OBE has confirmed that one of her favourite collections will support Pancreatic Cancer Scotland(PCS).

She has chosen to do this in memory of her late husband, Rick, who she sadly lost to the disease in 2013 at age 68.

Every piece sold from her Daisies at Dawn collection will donate 10% to the charity – which Sheila also supports as a Patron.

The gentle daisy has held a significance in Sheila’s life for some time.

When she married husband Rick in 1976, her long white dress was made of lace daisies, and she carried a large bouquet of the flowers on their wedding day.

The Daisies at Dawn collection grew through Sheila’s desire to give something back to charitable causes and to help others. Using a daisy originated from local girl Emily Findlay.

Emily had been diagnosed with neuroblastoma, a rare form of cancer, at age 14. Sheila wanted to do something for her and found out that Emily’s favourite flower was the daisy.

This reminded Sheila of one of Rick’s photographs which was taken from their home and workshop in Orkney and shows a sunrise with daisies highlighted in the forefront. 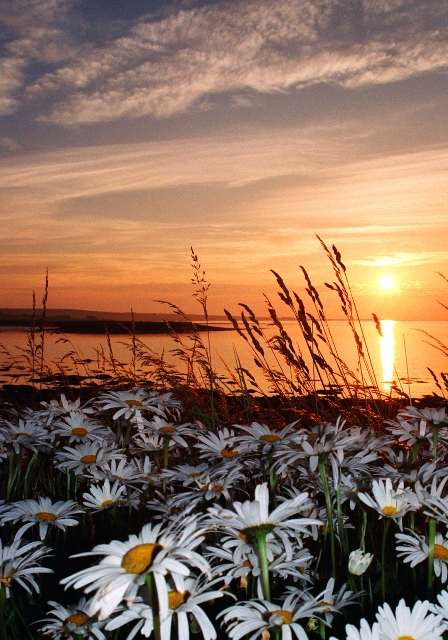 Using this as an inspiration, she created the Daisies at Dawn collection, which she launched in May 2014. This bright and cheerful flower could be seen to offer hope and joy to others experiencing dark times.

“I’m always inspired by where I live and what’s around me. Rick captured this beautifully and this is one of my most treasured photographs.”

To date the Daisies have raised around £70,000 for good causes, which Emily and her family have benefitted from, as well as the Orkney Charitable Trust, which helps young people in Orkney who are experiencing ill health, disability, hardship or disadvantage.

“When Emily was ill, we wanted to do something for her. We’re delighted she’s now doing so well, and I’m grateful we were able to help her at a very difficult time.”

Now the collection will show support for a charity close to Sheila’s heart and live on in Rick’s memory.

Scotland’s pancreatic cancer charity, PCS, was founded in 2010. They have recently announced their intention to merge with UK charity Pancreatic Cancer Action (PCA). Both organisations are driven by a need to take action to improve survival rates for the world’s toughest cancer.

While the classic daisy in the collection has white crystal petals with a sunshine yellow centre, there are also different coloured versions, and Sheila has hinted that a specially designed ‘limited edition’ purple daisy, the colour associated with pancreatic cancer, could perhaps make an appearance.

As a Patron of PCS, Sheila has always helped the charity. Last November, during pancreatic cancer awareness month, Sheila created two pendants for a social media competition which received a huge response. This convinced her that she could do more to help.

“I sadly lost Rick to this terrible disease. Locally I’m aware of other people in Orkney who have been affected by pancreatic cancer, but it affects people and their families all over the world. There is much we need to do to raise awareness.”

Sheila’s commitment to support PCS will see the Daisies at Dawn continue to grow its charitable legacy in Rick’s memory. The Collection will benefit and support many people and their families and raise much-needed awareness of one of the world’s toughest cancers.

“The time feels right to take this step, in honour of Rick, and to help other people and their families, like us, who have been touched by pancreatic cancer. Daisies hold a special place in my heart. They made up my wedding dress and my bouquet.

“The Daisies will commemorate Rick’s memory and our time together. I’m delighted I’m able to support a cause close to my heart, and to help others.” 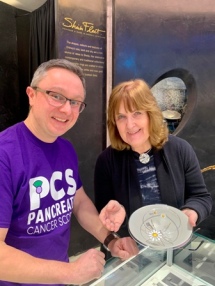 “Thank you to our patron Sheila Fleet for choosing Pancreatic Cancer Scotland to benefit from her beautiful Daisies at Dawn collection.

“Our partnership will help to raise funds and awareness to enable us to enhance support, healthcare, awareness, research and education in relation to pancreatic cancer and associated tumours.

“This is a stunning collection and we are extremely proud and excited to have Sheila, her wonderful team, and customers supporting in this way.