Sgathaich: Earth vs The Flying Saucers

I’ve looked at ‘War of the Worlds‘ twice now and  at several Ray Harryhausen films. But did you know that he wanted to make ‘War of the Worlds’ ? The studios turned down his offer and then were shown to be idiots by the version we did get in cinemas becoming a huge success. This however didn’t mean that the master of stop motion didn’t do an alien invasion film, in fact this one we will be looking at is considered to be one of the definitive examples.

Released in 1956 and it must be remembered that during the 50s there was a massive obsession with UFOs so there were a large number of alien invasion films (which would then once again be replaced by giant monsters soon after, sometimes aliens and giant monsters) well anyway onto the film.

No time is wasted showing us what we came here for: flying saucers made and animated by the master himself. He gives them a movement and life that makes them a character  in themselves rather than some prop. The central area of the flying saucer  remains still while the disk around it constantly spins and they move in a way unlike our earth vehicles.

After a bit of opening narration telling us about the UFO phenomenon we are introduced to  our leads, newlywed scientists Dr Russell Marvin and Carol, in their car on the way to their next rocket launch. They are talking about how they lost contact with all the others when a flying saucer shows up behind them (dun dun duuuun) but after smoking (because this was the 50s) they tried to rationalize it until finding out they actually recorded the sound of it which becomes important later.

When trying to send off the rocket the aliens suddenly show up and they look considerably less impressive than the flying saucers, very stiffly walking with as little movement as possible compared to how alive the saucers were. It’s actually a problem I find with the movie itself. All effects other than the saucers are really… kind of bad, such as walking on the spot while the background moves  – bad. 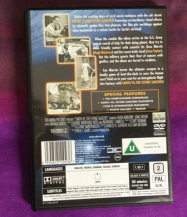 Well anyway the base gets destroyed, Carol’s father the General captured and the Dr and his wife trapped in the underground lab area, as the tape recorder dies it slows down and the noise from the saucer turned out to be a message about meeting him there. It’s a nice touch implying the aliens only acted in self-defence… Then later when he meets them they out right say they want to conquer the world and throw that angle out the window (thus making it look to the brilliant ‘Day the Earth Stood Still’ for a different angle on the aliens than wanton conquerors of worlds/ jealous of our world).

So it’s up to Dr Marvin to find out a way to defeat the aliens, while avoiding their attacks by running on the spot as the background moves very unconvincingly. But whenever those flying saucers are on the screen, the film really comes to life once again a testimony to Harryhausen’s skills. 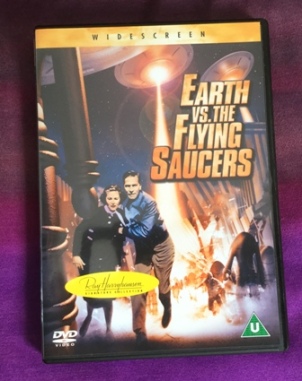