“Where, after all, do universal human rights begin? In small places, close to home – so close and so small that they cannot be seen on any maps of the world. “ Eleanor  Roosevelt

The Scottish Parliament hosted an inspirational event on Monday 10th of December to celebrate the 70th anniversary of the Universal Declaration of Human Rights.

“Seventy years ago this week, the United Nations adopted the Universal Declaration of Human Rights.

“After the horror and inhumanity of World War II, the declaration established the human rights of all people – the freedom of expression, the freedom from torture, the right to equality before the law.  It proclaimed all humans are born equal with inalienable rights.

“It was a defining moment in our modern history and the foundation of international human rights law.”

The conference discussed  Scotland’s challenges and leadership in the field of human rights.

The Scottish Government set up an independent advisory group to examine how Scotland could advance Human Rights. The First Minister of Scotland, Nicola Sturgeon,has accepted the recommendations of this group and a task force will be set up to take them forward.

Chaired by Professor Alan Miller you can view the report here: Recommendations for a new human rights framework to improve people’s lives.

The potential erosion of Human Rights when we leave the EU is included in the recommendations. 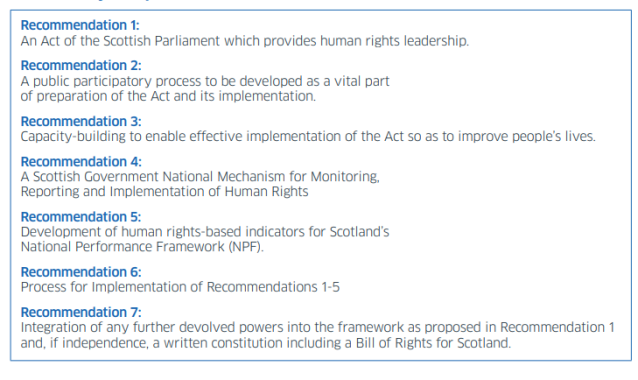 As with Scotland’s new Social Security System ‘Dignity’ is set at the heart of Scotland’s Framework for Human Rights.

“I set up the Advisory Group to offer advice on how we can further enhance human rights, as  I wanted to ensure Brexit does not harm human rights in Scotland and that we remain in step with future advances in EU human rights. I also asked for recommendations to ensure Scotland is an international leader in respecting and enhancing human rights.

“I share the ambition in this report that Scotland should introduce a human rights statutory framework and I support their recommendation that this should be done through public engagement, working across the public sector, civic society and parliament. As a first step I will establish a National Taskforce, early in 2019, to progress these plans. ”

The Scottish Parliament’s Conciliation Bill would have gone some way to protecting these rights but this is being challenged by the UK Government in the Supreme Court. The judgment of the Supreme Court will be published on 13th of December.

You can watch the Scottish Parliament’s “Human Rights Take Over!” here:

In her very moving address to the Scottish Parliament #rightstakeover Bianca Jagger urged those there not to take Human Rights for granted and shared her fears about the threat to our Human Rights with Brexit.

“Surely, in the light of history, it is more intelligent to hope rather than to fear, to try rather than not to try. For one thing we know beyond all doubt: Nothing has ever been achieved by the person who says, ‘It can’t be done.’ Eleanor Roosevelt