“In the midst of great change they still need the security and comfort on calling on tradition.” Martin Carruthers Archaeology Institute Orkney College UHI

Martin Carruthers and his team have been excavating at The Cairns, South Ronaldsay, Orkney for 13 seasons. On Tuesday 23rd of April, a packed meeting at the St Magnus Centre, hosted by Orkney Archaeology Society heard of the ‘finds’ that have been made, of the Broch itself and of the use the people were making of the area for thousands of years.

The excavations at The Cairns Broch may have only another 2 seasons to go but the recording, preservation and interpretation of the  wealth of material  uncovered there will continue for many years. 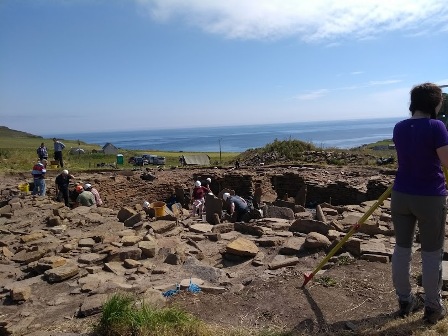 The Cairns Broch is not on the coastline but is set further inland from Windwick Bay. From its vantage point those who inhabited the Broch could see extensively across both the seascape and the landscape. The Broch itself, cut into a slope, also dominated the area for miles around. It is in a commanding position.

Preservation was so good of the remains of the Broch and what is being found there that the archaeologists are able to work out how people moved around inside the broch. It has two hearths – one on the West and one on the South East. Future excavations, as the team digs deeper, may reveal that it originally had one central hearth with the occupants changing the internal layout over time.

Archaeology works backwards so to see what happened first you have to go further down into earlier layers.

And layers is something The Cairns Broch has in abundance. A problem with drainage meant the inhabitants built up continual layers of flooring materials. Now seen in black, they would press down on this a layer of lighter coloured ‘earth’. The old bedding and vegetation which was used trapped within in it a myriad of other deposits including small animal remains and lost personal items. 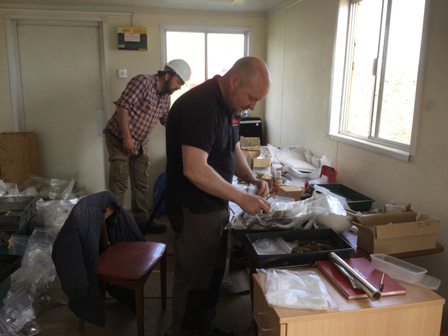 The Macro and Micro worlds which can be studied from the ‘finds’ at The Cairns reveal much about how the people lived and used the landscape.

Tiny glass beads show under the microscope the marks of wear and tear consistent with the wearer being involved in energetic movement. Is this evidence of dance? It is not known how any of the personal items found would have been worn and how the People of the Broch presented themselves to others – but it is intriguing.

The Carins Broch dwellers were farmers who enjoyed a very mixed diet – plentiful deposits of animal bones and a variety of grains have been found. The micro analysis of these deposits can also tell us of how food was processed.

the detached section of the 2000 year old wooden bowl found at The Well underneath The Cairns Broch, Orkney

Conservation work progressing on the bowl

One of the most exciting finds was the wooden bowl in ‘The Well’ which may have been over 40 years old itself, a treasured possession repaired 16 times until the day it was placed into the ‘well’.

Over 30 strands of human hair – cut at both ends – were excavated and these are now being studied by a team at Aberdeen University. The strands will be able to reveal much about diet, toxins and substances taken in by those specific people over about a 7 – 12 month period. One strand has been identified as being dark and coarse – another one is ginger.

Having known about it for 2 years it was only last year that the team entered the ‘well’ – patience is needed in archaeology. This year more work will be done looking at another subterranean feature – the  souterrain with its quern stone embedded in the roof allowing matter to be poured down into it. 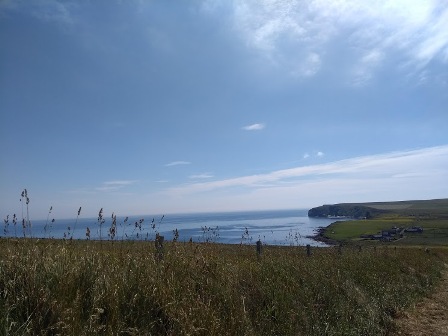 The Cairns is an area which was settled for thousands of years. The wider landscape reveals evidence of a Neolithic settlement and a Bronze Age collection of round houses. A linear feature is thought to have been a drove road where cattle were moved avoiding land planted with crops.

There are 18 Iron Age Buildings at The Cairns with occupation continuing long after the Broch itself was partly dismantled. Later structures like the souterrain digs into the closed up broch entrance. Building into the fabric of the Broch went on and ‘placing’ items there – a whale bone vessel with 2 red deer antlers and a quern stone – the vessel containing the remains of 2 new born lambs, fish and a human jaw bone.

The Iron Age forge, where high quality iron was produced, also contained many  moulds for everything from nails to jewellery. The Cairns was a busy community and perhaps numbering several hundreds. Was there also a village built around the Broch when it was occupied  as is the case with The Broch of Gurness?

For Martin Carruthers The Cairns is where both societal change and stability can be found.  The archaeological evidence is of a place where lots of things are going on but where transition appears to be smooth.

The Cairns Excavation will resume in June and July and visitors/volunteers are welcome. There is a great blog you can read if you cannot make it to the site itself. The Cairns Dig Diary

excavating the large hearth located in the Wag Structure