It’s a well known adage (coined I believe by one of Historic Environment Scotland’s Orkney Rangers) that if you stick a spade in the ground in Orkney it bleeds archaeology.

SSEN are planning to build a substation at Finstown and of course now the folk from ORCA (Orkney Research for Archaeology) are excavating a Bronze Age burial kist which was discovered during their exploration of the area. 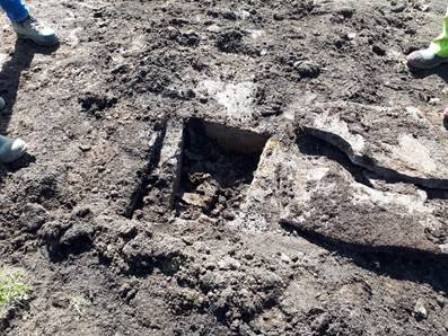 The cist was found intact at the proposed Finstown substation site, just below the ground surface, and consists of a stone-lined box capped with a large flat stone, and would probably have contained the remains of an individual who lived during the Bronze Age.

The burial was discovered by ORCA Archaeology as part of SSEN Transmission’s commitment to undertake environmental survey works ahead of construction, should the substation be approved.

Local soil conditions aren’t great for the preservation of bone, and at first sight the cist appears empty, but careful excavation may reveal some traces. 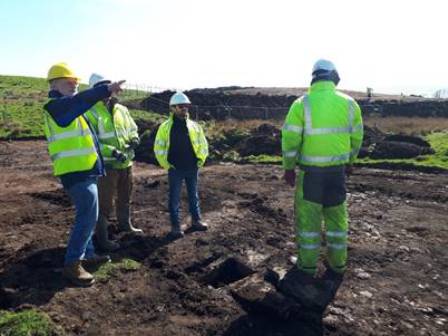 Standing around the cist in perhaps the same position as mourners did 3,500 years ago, the ORCA Archaeology team discussed with SSEN Transmission the importance of the find and the next steps involved in excavation and recording, and the implications of the discovery for our understanding of how people lived and worked in the landscape.

“Previous survey work told us there was significant archaeology present at the site and we are pleased that within the first few days we have our first major find.  It is fascinating to think that we are the first people in 3,500 years to look into this structure. We are working with SSEN Transmission to record the archaeology of the site, and this is a great start.”

“As a responsible network operator, we take our environmental standards very seriously and strive to do everything we can to ensure that our proposed works minimise disruption and impact to our host communities, whilst meeting our License obligations.

“For this particular project, that includes working with local archaeological experts ORCA as part of our pre-construction assessments to fully understand the archaeological features and history at the Finstown site. We are delighted that it has resulted in the discovery of such an exciting feature that otherwise may never have been found. We look forward to continuing to work closely with ORCA as the excavation progresses.”