Signs of the Times – At the Ring of Brodgar

We parked in the car park, walked along the board walk, crossed the road, and, on the entrance gate to the path, saw the first of the new signs – one which I heartily approve of! 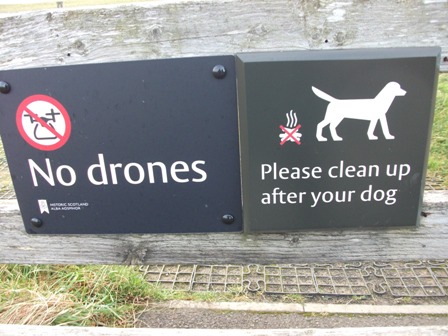 I know, drones can be useful, very useful, for gathering  information and reaching inaccessible places, but, they can also be noisy, and intrusive.  It’s possible that this is another example of innovation out-stripping legislation, and maybe stricter controls will eventually be introduced, whereby they can only be used in specific circumstances, and under licence.  Meanwhile, I was pleased to see my first ‘No Drones’ sign, and interested to see that there is a symbol to go with it.  A drone, with a big, red X across it!  A sign of our times.

The next sign, might be of interest to visitors to Orkney.  Through the summer season, there are  FREE, regular, frequent guided walks at the Ring of Brodgar, conducted by the Historic Environment Scotland Rangers  https://www.historicenvironment.scot/  For the winter months, these tours have been reduced to one a day, at one p.m., on a Thursday.  For these walks, meet at the car park, but, before you set off, it might be best to check that the walk is happening on that day, as the weather can be…..unbelievable!  Contact details for the Rangers, are here………. https://www.orkney.com/listings/ring-of-brodgar-walk 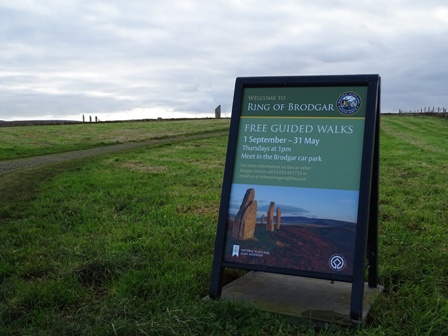 If you wish to just have a walk, there is still open access to the site, but, if you’d like to have a guide to fill in the history, and pre-history!  The HES Rangers will do so.

I say that the site has open access, which it does, to some extent, but, due to increased footfall, and rainfall, gates have had to be installed at what used to be both points of access to the inner circle of the ring of stones.

These gates are wooden, painted a soft green, and are relatively unobtrusive.

They have become necessary, to give the most heavily used pathways time to restore themselves, re-generate, and, as some smaller signs say – rest.

This is a natural site – turf, heather, and stone, open to the elements.  It’s lasted for thousands of years, but changes in climate, and human activity, mean that, if it isn’t going to need to be closed off completely, it needs to be treated with respect, and – allowed to rest.

In the area surrounding the Ring of Brodgar, there are quite a few cairns.  The one right next to the Ring, has suffered the consequences of its proximity, and was becoming badly eroded – literally being worn down.  That cairn has needed to be completely fenced off. I’m not sure if this is a temporary measure, or if it will be on-going.

The difference between the paths and the cairn being closed off, is – close off the paths for a time, and they can heal themselves. The cairn has been subsiding in places.  It can’t, physically, be re-structured. So, possibly, access will need to be denied indefinitely – in the form of the fence.  This fence, being another sign of the changing times at Brodgar, where the whole site used to be open, with HES only requesting that folk kept to the paths, and didn’t go into the, more vulnerable, middle of the Ring, or cross the ditch.

An odd thing about this cairn being fenced off, is that  – from across the other side of the Ring, it looks as though the fence posts are part of the ring of stones – or, we think so!

From closer to, the stones, posts and cairn, reminded me of the broch on which the graveyard of St. Michael’s Church, in the Parish of Harray, is placed… 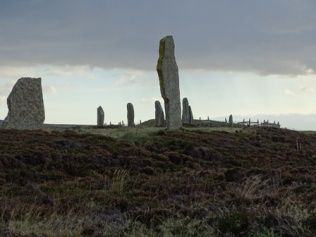 That’s not really much to do with the signs  of the times at Brodgar – I just like the image, and the connection it placed in my mind.

So, signs and symbols at Brodgar……

Firstly –  of the possibility of intrusion at these sites, by people using new technology.  Then – the signs which must forbid us and direct us, for the good of the place – a place of great significance and symbolism to the people who raised the stones and the cairns.  And – the gates and fences, which are, in themselves, telling us where we must not tread.

It’s all needed – all signs of the changing times for the ancient sites of Orkney.