Maree Todd: Comments On A Momentous Week Ahead 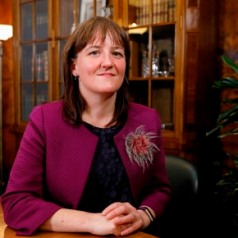 There have been many momentous weeks in politics in recent months, but this week – at 11pm on Friday to be precise – we face the reality of being taken out of the EU against our will.

Before that, on Wednesday, the Scottish Parliament will be asked, in a landmark vote, to back a referendum on independence, reasserting the principle that it is the right of the people of Scotland to determine their future.

Wednesday’s motion leads off with the statement that:

“The Scottish Parliament recognises the sovereign right of the Scottish people to determine the form of Government best suited to their needs, [and] agrees with the cross-party Smith Commission report published after the 2014 referendum and backed by the UK Government that “nothing in this report prevents Scotland becoming an independent country in the future should the people of Scotland so choose.”

Following the vote, Nicola Sturgeon will give a speech on Friday to mark Scotland being taken out of the EU against our will, and setting out the next steps in the campaign to secure Scotland’s future as an independent country.

After the First Minister’s speech SNP figures, including myself, will attend community events and vigils around the country to mark Scotland’s unwanted exit from the European Union, as people across the country ask Europe to leave a light on for Scotland.

While the impacts on business and citizens may not be immediate, there is no doubt that from 11pm on Friday 31st January there will have been a material change in Scotland’s circumstances against the wishes of the vast majority of people in Scotland.

It will also be clear that a future in Europe can only be achieved by Scotland becoming an independent country.

I find it all the more disturbing that Scotland is being forced out of the EU, which most agree has been a force for peace, in the very week that we have commemorated the 75th anniversary of the liberation of Auschwitz. I was moved to see footage of the Holocaust Memorial Day vigil in Orkney, where people gathered to remember victims of genocides and persecution.

I made a very emotional visit to Srebrenica last year with the Remembering Srebrenica (Scotland) charity, which commemorates the Srebrenica genocide through education and memoriaI. This week Hasan Hasanović, author of the book ‘Surviving Srebrenica’, survivor of the ‘Death March’ and human rights activist, visited Scotland to speak during a Holocaust Memorial Day event at Holyrood. If first hand witness of genocide is tough to hear, how much harder must it be to live through it? How much harder to keep living after? And how much harder to turn away from hate?

This is a regular column by Maree Todd MSP, SNP. All Highlands and Islands MSPs have been offered the same space to share their views