Album Review: ‘Blame It On The Thunderbird’

– not forgetting Fraser Retson on ‘moothie……….

I don’t remember the first time I heard Keith Gooch singing with a band, but I do remember the last time. It was in the back bar of the Royal Hotel in Stromness – not sure how many years ago now, and the band was Smokestack 45.

Remember Smokestack 45?  A collection of fine musicians, some of whom have gone on to play in other bands, but, I’m sorry to say, Keith has been pretty quiet on the music scene in Orkney, for some time. He did release a solo C.D.  – ‘Reggaenomics’, which is what prompted Eamonn to contact him. I’m pleased to see that he’s making music again – he’s very good – no messing about – just belts it out, with honesty and strength.

And so, enter Eamonn Keyes, who I first became aware of through his writing for ‘The Orkney News’  https://theorkneynews.scot/?s=Eamonn+Keyes .  It turned out that Eamonn is not only adept at weaving words, he also spreads the groove to the world, through music.

Eamonn has played everywhere, and has met everyone ( see his piece about Phil Lynott’s guitar – PHIL LYNOTT’S GUITAR!!!).  On moving to Orkney, he stepped into the music scene here, and already has successful appearances at the Orkney Blues Festival to his credit.

Eamonn contacted Keith – a collaboration began – which has culminated in their C.D. ‘Blame It On The Thunderbird’, which was released on Monday 10th February 2020 – is available in CD format from Grooves in the Old Library, Laing Street, Kirkwall – or as a digital/download on iTunes, Apple Music, Google Play and Spotify.

The title caught my attention, and had me singing ‘Sweet Gene Vincent’ by Ian Dury & The Blockheads, and Mike singing Seasick Steve’s ‘Thunderbird’ song. 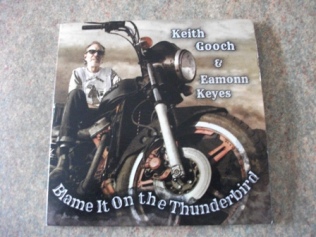 Eamonn described the vibe as … “a bit Blues, Jazz, reggae whatever.”   I liked the sound of that, so I listened to a ‘taster’ on Soundcloud…..  Thunderbird Taster Shot by EPK

And – first reaction – bit of Tom Waits, bit of Nick Cave – so, good ‘echoes’ to start with.

It sounded interesting – in fact, got me wanting to hear more, which is a good sign – so I moved on, grooved on, to the CD.

New music isn’t new, if it’s just like other people’s stuff – far too much of that is happening now.  These two musicians, however, have put together something which does remind and echo of some very, very sound musicians and forms of music, but what they have produced – is all their own.

Keith’s voice is more ‘growly’ than when I heard him last  – not a bad thing at all – especially for this kind of material.

How the CD is put together, is smooth, though Keith’s voice is …rough – in a good way.  Eamonn has applied the production levels to match the songs and the music – he knows what he’s doing, does Eamonn.

The title track – ‘Blame It On The Thunderbird’ – well – I want to get the chance to dance to it – ‘nuff said – meanwhile, I’ll make do with gyrating round the kitchen.

‘That Kinda Thing’ and ‘Demi-Monde’ – a bit of Dr. John Voodoo?  The old Night-Tripper – that man was a bad, bad man, especially when the sun went down.

It’s good to see that the final song ‘Keep Rollin’ Right’ is a tribute to John ‘The Duke’ Wales – The Orkney Rockabilly.  ‘Duke’ put together some great music gigs, while he was here.

I’d say ‘Rest in Peace’, but I doubt that he’d want to – no, he’ll be rocking out – somewhere – possibly to this song!

I could spin more words, telling you about the C.D. and how it sounds, but, really, what it comes down to –  as always with music – you need to experience it for yourself.

Related article: Blame It on the Thunderbird: New Album Out Now