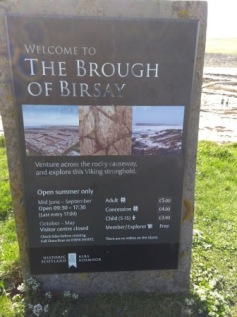 The Brough of Birsay (not to be confused with an Iron Age Broch) is a tidal island and contains the remains of a Norse settlement. The Picts were there before them, of course, but that is for another tale.

The site is managed by Historic Environment Scotland so that during the summer and in working hours, it may have a custodian on it. When that happens you will need to pay an entry fee. At other times, providing you can get to it, then on you go.

There is a car park – follow the road to the right at the remains of the Earls Palace. It can be very busy and spaces are unmarked so you often get ‘interesting’ parking. There is an area for buses to stop in.

Steps lead down from the car park to the beach and the causeway. You can only cross when the tide is out. 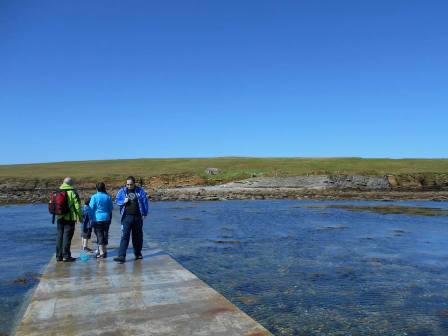 Waiting for the tide to go out

This may seem an obvious thing to say but I have met people attempting to cross as the tide is coming in and  washing over the causeway. It can be slippery under foot so you do have to take care. Steps then lead you at the other side up to the site.

Now you can cross

The Brough contains the remains of several long houses, a Medieval church and a monastery. You are able to walk around all of these and explore within the time limit that you have there which is approximately 4 hours if you cross as soon as the tide has gone out.

The Norse remains are incredible and includes what may have been a sauna with underfloor heating and channels for water. There is a drainage system down which I once saw a wee troll but it seems to have absconded or been kidnapped since then.

The remains are precariously balanced on what is now the edge of the Brough and have been shored up –  but time and tide as they say……..

Also on the island is a Stevenson Lighthouse and at the right time of year – puffins. And don’t forget the Picts.

If you get to the car park and have timed it badly so that you have missed the tides then fear not for there are lovely walks in either direction. Birsay is a bonnie place to explore and hotching with history.

Read more about the Brough and Birsay here:  Didn’t we have a loverly time, the day we went to Birsay……. 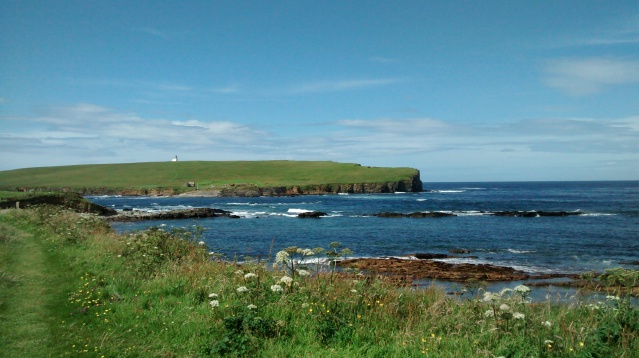