Tuesday night, 5th of March, saw an OREF talk  about energy in Malawi in the St Magnus Centre, Kirkwall . This was given by Edgar Bayani and a colleague from Community Energy Malawi. ( CEM )  He was describing the situation in Malawi and the cooperation between  CEM and CES ( Community Energy Scotland ). The Scottish government have given CEM a grant to progress this work. 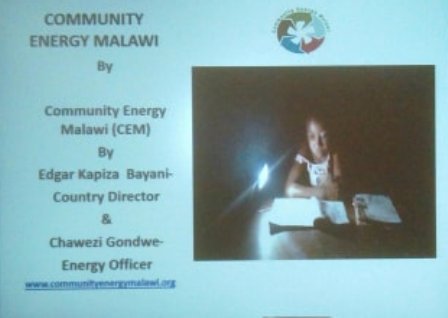 The Scottish Government grant has enabled CEM to complete  some 46 projects affecting 80,000 people . They are developing micro grids.  A 20 kW micro grid will power the lights of a small village , heating not being required . It would also power small grain mills currently powered by diesel . In addition it would provide charging for mobile phones . Many people have to walk between five and 10 kilometres twice a week to keep their phones charged.

20 kW of power would also enable the village to install a small water pump . Currently the women of the village have the drudge walking to the river and carrying water in buckets . Using this river water exposes them to waterborne diseases . A small water pump would facilitate filtration which would remove bacteria for example .