At the bottom left hand corner of our garden, there is a cairn.  Mike built it, and, initially  it was to be in memory of Ben-The-Dog, but as he built it, we decided that it’s to be for all that have passed.  He started by clearing a circular space, then he placed one of the heart-shaped stones which are to be found on the Orkney beaches, in the centre of the circle.  Then he placed a circle of flat stones around the edge of the space, and in-filled with more flat stones. Then, he commenced to build.

The cairn has all sorts in it – a stone with a fossil, which we found on a beach. We don’t know what the fossil is, but it’s a bit of deep time, there, in our cairn.

There is a stone with limpet scars – which fascinate me.

Limpets settle on a stone, and, when they hunker down on the rock, to brace themselves against the incoming tide, they make little circles.  Some are quite feint, some are quite deep, some are very deep. They actually have ‘home’ scars, which they return to, time after time, which is why some of the scars  become deep.

The deep limpet scars are very like the ‘cup marks’ to be found as carvings at some ancient sites – ‘art’ reflecting what the carvers saw around them?   Cup marks were found on a stone at the Ness of Brodgar which, to me, look very, very like the limpet scars on  this stone, which isn’t  part of the cairn, was found on an Orkney beach,  and  has some impressive ‘cups’. 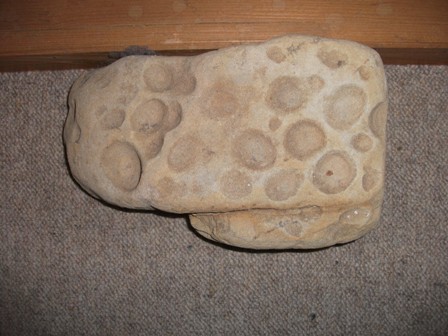 Copyright forbids my use of the picture of the stone from The Ness, but if you follow this link to the Dig Diary, you can see for yourself – it’s also a timely reminder that the Ness dig will be starting again, in July.  http://www.nessofbrodgar.co.uk/dig-diary-thursday-july-28-2016/

Then there are just various stones, of various pleasing colours and shapes – plus a limpet shell!

Sometimes, Auber’s-The-Pheasant decides to stand on top of the cairn, to survey his domain.

Another  character who likes to do this is Seymour-The-Seagull – we call him Seymour because,  he stands on the cairn, so that he can…………

I don’t have a picture of Seymour – he saw me coming!