As part of the Scapa 100 events,  commemorating the centenary of the scuttling of the German High Seas Fleet in Scapa Flow

The oil paintings were painted underwater. I hadn’t known that this was possible, until talking with the ladies who were ‘minding‘ the gallery. The wonders of modern science – painting, underwater –  Caroline must have had to paint pretty rapidly – extra-ordinary.

The sculptures, are more extra-ordinary still. Caroline has taken bits of waste from beaches – mostly plastic, but some other materials, and encased them in plastic, to produce sculptures which are making a strong point about pollution, climate change, The Trump – and which also are sometimes amusing, whilst doing so.  One which gets many people smiling, is a melting iceberg (not at all funny) with a polar bear on top, weeing on Trump’s head! Very funny.  Looks a bit like Mount Rushmore, but Trump’s memorial is more likely to be this……… a melting iceberg. 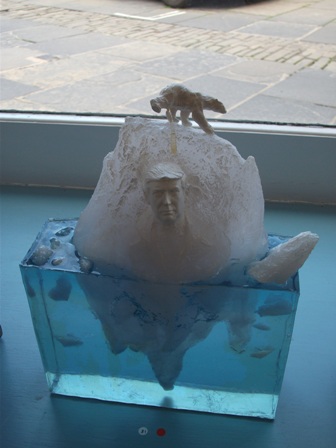 ‘Surfing a Plastic Wave’ –  a sculpture of dolphins, wearing breathing apparatus, surfing a wave, isn’t, in itself, at all amusing, but, for some reason, it makes you smile – I think maybe because it’s so clever. 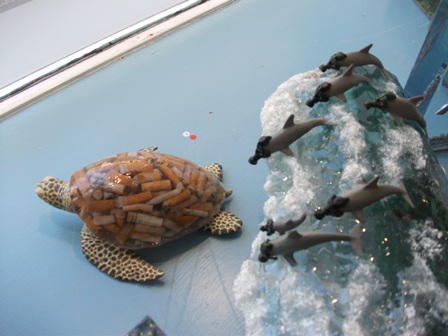 You’ll notice, next to the dolphins, a piece which is entitled ‘Teenage Mutant Fag-end Turtle’ – an amusing title, for something which, again, is far from funny – as the text on Scapa Joe’s card states – “Turtles eat cigarette butts, which make them feel full and they eventually starve.”  This is clever, in a number of ways – at first I didn’t register the fag–ends, I just saw a cute turtle, then I realised what it was about.  And – teenagers – smoking.  Destructive behaviour, all round.

Along from  the dolphins and turtle, there’s a piece called ’Ghost Fishing’, and the accompanying text states – “Lost fishing nets, lines and creels catch fish and wildlife, which become trapped and die.”  Become ‘ghosts’.

There is a project afoot around the coast of Orkney, and elsewhere, to attempt to clear up this marine debris, and that project is known as Ghost Fishing.  Maybe because these pieces of underwater junk, could be said to be the ‘ghosts’ of the activities which they were used for?  https://www.ghostfishing.org/the-problem/

Whilst on the subject of fishing activities, and their possibly damaging effects on the world – the piece called ‘Crack on Kraken’,

shows a Japanese whaling ship, finding out what it might be like if the tables were turned, and a member of the marine  community – a  ‘Kraken’ – decided to destroy them.  The Nisshin Maru is the flagship of the Japanese whaling fleet. Despite claiming to be a research vessel, it, or rather, the people on board it, kill hundreds of whales every year.

The last example of encased plastic sculpture which I’ll mention, is one which is a bit different.  Each piece is simply  a whale fluke, a plastic whale fluke filled with little bits of the rubbish which is filling the oceans.  Each one, looks good, but, put a number of them together, and it makes a striking assemblage. This piece is called ’Flotsam & Jetsam’

And the final piece of sculpture is the one which hit me hardest – I’m not sure why. They aren’t encased in plastic, but they are covered in an oil slick. A Mermaid, a seal and a bird – things of beauty, blackened and suddenly somehow menacing.  This is very good, and very horrid, at the same time. I hope that Caroline sees what I mean there – not an insult. It’s like when a piece of writing is so strong, that it hurts you – but it can only do that, because it is so strong.

The photographs by Marjo Tynkkynen, of the wrecks of Scapa Flow, are eerie enough, in themselves, but, add to that, trying to take pictures of them, with a not very sophisticated camera, with the lighting in the gallery , and…..the eeriness achieves another dimension. Not of my doing – just one of those things that happens, then you think – yes, that’s groovy.

A whirling ‘fan’ of metal, from SMS Brummer,  becomes a sea-creature, swimming through the deeps.

SMS König , has an octopus/Kraken?

And SMS Karlsruhe – an undersea standing stone?  And a spectral diver, somehow transported to the gallery? 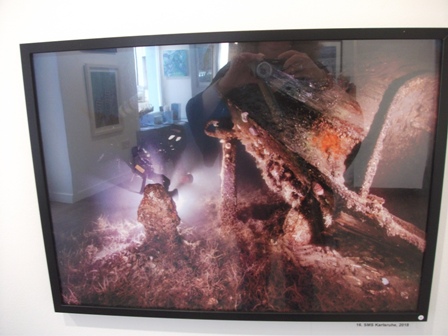 If you missed the exhibition, or want to see more of their work, they are on Facebook https://www.facebook.com/sculptures69/