Records of a Bygone Age: We Plough The Fields and Scatter Part 2

Thank you to the Stronsay Limpet for permission to publish this article.

Link: Records of a Bygone Age: ‘We Plough The Fields And Scatter’ Part 1

In the middle of the 19th century, much of Stronsay was still hill land,heather and rough pasture and it was the power of the horse and a version of this new all iron plough that played its part in transforming the landscape into what we see today, with nearly all the island being turned into arable land or improved grassland.

Around the end of the 19th century a part of Clestrain, at the shore near Linnabrake, was still rough pasture which was first ‘broken out of hill’ by John Gorie of Clestrain and that field still goes by the name of ‘John’s Land’.

The story is also told of the farmer at New Holland in Holm who set off to plough a large section of hill land. He turned over his first furrow, a full mile in length, and when he lifted his plough at the end, the furrow rolled back to where it had been for its entire length! I can imagine a few choice words may have been said.

Then in 1876, the first ploughing match was held in Stronsay, this being only contested by competitors of the farms of Holland and Housebay – 8 from Housebay and 5 from Holland. In the report of the match it is stated that:

Accordingly in 1877, with the formation of an Agricultural Society having taken place, the match of that year was of a much wider scope with 28 competitors taking part when money prizes were to be had and the Royal Highland and Agricultural Society’s ploughing medal to be awarded.

This medal was competed for by what were classed as ‘Ordinary’ ploughmen, with the winner of the medal then moving up to compete in the ‘Champions’ section for a cup in following years. Strict criteria were set down as to the width and depth of ploughing and the amount of ‘back’ to be shown and rules were strictly enforced!

Regular events then took place until the 1890s when a break occurred. Matches restarted in 1924 with a reformed Agricultural Society, continuing until the late 1930s. By the time of the match in 1924, the place of the old longboard plough, which could be 6′ long from the tip of the share to the back of the mould board,was being challenged and overtaken by a newcomer – the ‘Dux’ plough which had a much sharper and turned mould board which produced a much more broken and open furrow which was far easier to break down into a tilth in Springtime and, its supporters said, led to the production of much heavier crops. Farmers and ploughmen were much divided in their opinion of this new plough and, as the two types of ploughing were completely different, the ploughing matches from 1924 on had separate classes for longboard and ‘Dux’ ploughs.

With the introduction of the first tractors to Stronsay in the 1920s and then Harry Fergusson’s revolutionary new  three point hydraulic lift for tractors in the 1930s, the days of the horse were numbered and the last recorded horse ploughing match appears to have been held in 1938, with the cup for the best ploughed rig being awarded to James Chalmers of Clestrain and the RHAS medal to S. Shearer of Whitehall.

As the years passed, new styles of ploughs appeared and, with the advent of shear pins and trip-leg ploughs, the potential damage that could be caused by hitting a rock was reduced and consequently ploughing speeds could be increased.

The invention of the reversible plough was also something of a landmark in the progress of ploughing as land no longer needed to be ploughed round and round in rigs. With one set of ‘right hand’ mould boards and one set of ‘left hand’ boards on the same plough, it was possible to start at one side of a fields and work across to the other side, meaning more efficient ploughing and a flatter surface, with no ‘feerings’ and ‘finishes’ to contend with.

In the last 100 years or so we have moved from the horseman with his team ploughing an acre a day to the point in 2005 where a 500-horsepower tractor complete with a 20-furrow reversible plough set a new ploughing world record, with 44.5 acres being ploughed in one hour and an unbelievable 793.6 acres of ground being turned over in 24 hours. That is the equivalent in size to 530 football pitches!

Ploughs now take a wider and deeper furrow, generally with a shorter and more sharply turned mouldboard which produces an even but very broken finish which can be easily broken down into a fine seedbed. In lighter soil, it can be almost impossible to see the individual furrows, a result which would undoubtedly make the ploughmen of old turn in their graves!

Sometime in the 1950s ploughing matches, now using tractors, started up in the island once more but now under the auspices of a newly formed Young Farmers Club. This was quite a social occasion and some of the competitors would decorate their tractors and ploughs and even turn up in fancy dress! 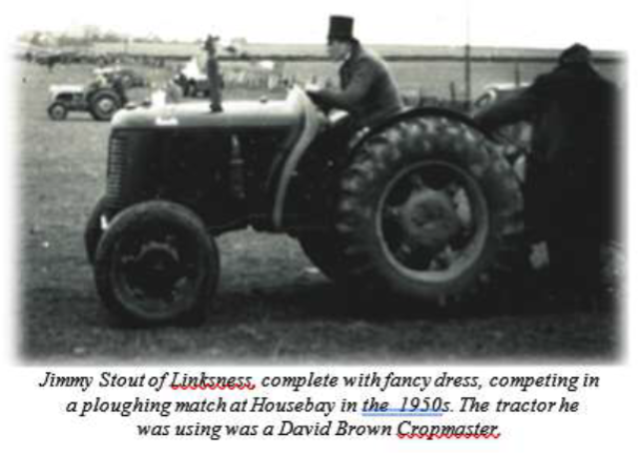 I believe the last of these was the match of 1963, which was actually held at Huip in December 1962. The ‘Orcadian’ of the time reports that:

The Young Farmers Club held their annual Ploughing Match at Huip on 14th of December, when sixteen valiant ploughmen took the field under extremely bad conditions. Prizes were awarded as follows:

Thanks were expressed to the judges, Messrs Normand and Alistair Muir from Sanday who did a good job under the most trying circumstances.

Some more information on the ’16 valiant ploughmen’ and ‘the most trying circumstances’ encountered was supplied by Raymond Dennison who was working at Airy at the time. He recounted that he had set off from Airy,heading for Huip in a real downpour. He was on a tractor without a cab, as was common in those days, and, although clad in a full suit of oilskins, the oilskins then weren’t all that great and he was wet before he got half way there. He ploughed away with the rain never letting up all day and commenting:

I’ve never seen rain like it in me life – the water was running down the fur to meet us as we came back up the field. I got home soaked to the skin and chilled to the bone and never even went back to the prize giving and dance that night I was so cold.

This was to be the last ploughing match to be held in Stronsay, the end of more than a century where ploughmen were happy to come along and test their skills beside their fellow men, and the end of an era for Stronsay.