Given he is the number 1 Nintendo and video gaming icon it should come as no surprise that Mario is in a lot of games. Not just his platforming but also racers ( Sgathaich: Mario Kart 8 Deluxe (Switch)) and basically ever sport Nintendo can manage to work out how to make a game of him that is decent ( he will go with Sonic to the Olympic games but not even Mario’s cast of characters can make cricket interesting. )

Though not having as many entries as his kart racing games, since the N64 Mario has had a decent number of Tennis games. I enjoyed the N64 one very much and remember working hard to unlock the extra cups by getting everyone to star rank and then beating the 3 star rank cups, ah good times. I was looking forward to this new Switch iteration and it having my favourite Mario character Rosalina, always a plus. 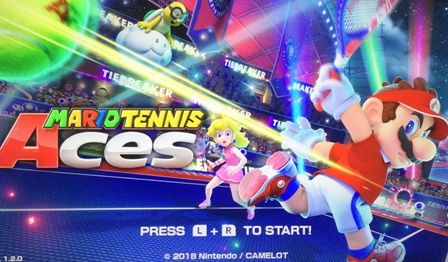 As mentioned this is a tennis game starring the Mario cast and they each fill into certain brackets with strengths and weaknesses of their own. All-rounder, powerful, defensive, tricky, technical and speedy. (unsurprisingly Mario and Luigi are all rounders). The main game is just tennis really but with a few additions bar the characters. You get your different kinds of shots, some fly further but low down, some go high to catch people hogging the net, a bunch. Some as you charge up a shot to hit the ball you gain power which on standard modes can be used to execute special effects. Special abilities range from a strong shot, slowing down time, a sudden dash for special blocking and if you have a full gauge you can do a signature shot.

The game has a story mode, but its more a collection of special stages, beating a boss with special tennis shots or hitting X number of targets, all beating it does is give you more rackets (only usable in single player) and new stages that can’t be used in tournament mode only in free play.

The game left me feeling like a lack of achievement. beating single player as mentioned only really gave me new stages that didn’t come up on tournaments. There are unlockable characters, but those are unlocked as the months go on and you get them early by playing online (which is probably where the meat of the game is but didn’t play much of that). So when I played it I felt missing those hard long games that allowed me to unlock more. I didn’t even get many long matches against the computer as by the end of a tournament the opponent was low on rackets so I aimed to destroy them rather than go through a long game.

Ah yeah remember those powerful and signature shots I mentioned earlier? well If an opponent fails to get a perfect block on them (usually done by slowing time to make it safer) then your racket gets damaged. Take 3 shots of power shots or one signature and it’s destroyed. Run out of rackets and you lose. So when a tournament was on the final stage, they usually have few rackets left.

The game is ok for shorts bursts and each character is filled with that Nintendo charm, but I couldn’t help but feel a lack of accomplishment from playing single player alone. Oh you can turn off those special moves or even make it so the joycons can be used as rackets but I never played those modes and I assure you they don’t unlock anything ether. It’s ok for short bursts but lacked that long staying power.