Sgathaich: The Fall and Rise of the Chaos Legions – The Rennaisance

GW always had a problem with leaks. Someone would somehow be able to get images out of new models or word of them coming. One time the entire Necron line was leaked weeks before the official announcement, something that annoyed many people working on the official stories as they weren’t able to talk about something everyone already knew.

GW brought out a special YouTube channel called Warhammer TV. It’s a good channel with people talking about the games, giving painting advice and importantly, doing announcements. I like to think of it as GW taking control of their own leaks, they are bound to happen. GW announcements sometimes have a sort of light comedy feel to them, think like one of those work place sitcoms but in a way that shows they know what their fans are talking about, for example they even did a video all about their leak department.

And so in 2016 a video appeared from Warhammer TV. A man was walking through the halls of the office when he found a bin. He looked in and said something odd. Plastic Thousand Sons? That was more than enough to get me excited. The Thousand Sons just used the same old (and by now very old for 40k standard) models but with a few metal upgrade parts but now we were being told that we were getting brand new plastic Thousand Sons, a whole new mould? But that was nothing,  as soon, rising out of the bin came another man and in his hands was the Daemon Primarch Magnus the Red. Not since Nagash two years earlier had a single model held so much importance. Primarches were so important to the lore of Space Marines but never before had they appeared in the game.

The second half of warzone Fenrus was announced with a trailer and as Magnus the Red said himself “these miserable echoes of Lemun Russ will face a legion renewed”. Not a warband a legion! Wrath of Magnus came with full rules for using a Thousand Sons’ army, not a war band, not a Chaos Space Marine army but Thousand Sons as their own faction! The release came with new models; new Rubric Marines were joined by never before seen Exalted Sorcerers and Scarab Occult Terminators, joined by Tzaangors. All units exclusive to Thousand Sons, updated Ahriman now on a disc and of course Magnus the Red himself. These now played their own way, unique abilities and rules. All combined with a story where Magnus was triumphant in his plans despite the Imperials foolishly believing they had won.

But that wasn’t all. Accompanying Wrath of Magnus was the Chaos Legions book we had all dreamed of. Maybe a page or paragraph of a rule unique to the legions but it showed, they had not been forgotten. These were the true enemy of the Imperium of Man not some random nutters.

40ks 7th edition came to an end with Roboute Guilliman Primarch of the Ultramarines coming back from the dead and going on a quest back to Terra where he faced Magnus on the moon leading to its next big era 8th edition. I was happy to see when the factions for 8th edition were announced, Thousand Sons weren’t just rolled into CSMs but their own faction. But they were not alone. Death Guard, another of the legions this time Nurgle associated, were also listed as their own faction, indeed the starting boss had them front and center, soon joined by Mortach their Primarch returning as well. 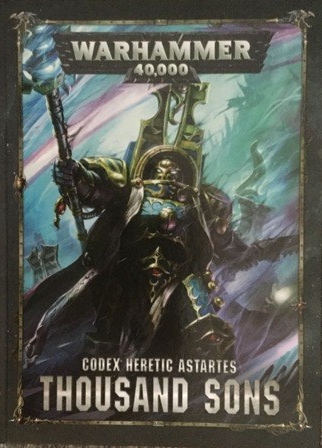 I can now buy Warhammer novels about the Chaos characters like Ahriman First Prince and feel like these are the people I’m using in the games now. What’s more the story is still progressing, I’m not being told the legions don’t exist anymore and the lore agrees. Recently in Vigilus Ablaze major Chaos new models were released, and while special rules for prominent war bands were introduced. It still shows that war bands are second to the legion in the rules and I look forward to the next legion to join the ranks of the Thousand Sons and the Death Guard to emerge in full force. Well not counting the Black Legion that did get a whole bunch of new rules with Vigilus Ablaze complete with new characters and updated Abaddon.

So there we have it readers. A Golden Age followed by a Decade of Darkness, so many years of hope and failure. Many tournament lists of Chaos Space Marines still tend to focus on not taking Chaos Space Marines in favour of cultists and special elite psychers but that being what a lot of 8th has had issues with, not just Chaos. GW are trying to fix that, Chapter approved have brought down the cost of the less used units like Rubric Marines and regular Chaos Space Marines while increasing the more spammed units. But a fun little bonus is right now one of the most used characters is Ahriman. Not that I ever played the game for Meta builds. I like it when what I’m using shows up, but the fact I can now feel like I’m playing my legions again gives me hope for the future. Ironic really, the return of the greatest enemy of the grim darkness of the 41st millennium being the symptom of good things to come forward.

Sgathaich:The Fall and Rise of the Chaos Legions- The End Times & The Age of Promise

Sgathaich:The Fall and Rise of the Chaos Legions – The Fall & The Dark Times

Sgathaich: The Fall and Rise of the Chaos Legions – The Golden Age