Well, at least the Burns Supper season finished before the Coronavirus arrived.

Or it just about did. Earlier this week, I was judging the Scots poetry competition organised for the primary schools by the local Burns Club.

As usual, the kids were absolutely brilliant at it – even those who had moved to Scotland from other places and for whom the Galloway-Irish specific to Southwest Scotland wasn’t their native accent.

It got me thinking about how we perceive our own language and culture.

Frankie Boyle’s recent television series about Scotland included an episode where the inmates in Peterhead prison are in discussion with a guy who’s promoting Scots and its many regional dialects – like the Doric spoken by the prisoners.

They’re discussing a theme that many of us would recognise – the phenomenon of speaking differently in the school to the way we would speak to our pals. 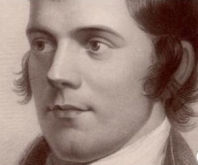 Frankie then reflects on this. Scotland is country where, not that long ago, you’d get a certificate for reciting Scots on the Friday and get the belt for using the same words in class on the Monday.

I get that. I was taught English by a guy who infused in me a love of Burns but tore strips off us if we said “aye” in class. It’s such a mixed message, the ultimate in cognitive dissonance. It’s a deep-seated, historical, cultural cringe. No wonder we’re such a mixed up people, frothing about Gaelic road signs. No other country on earth has such a damagingly ambivalent attitude to its own linguistic heritage.

Your language, your culture, shouldn’t be something that you take out once a year at St Andrews night and then place carefully back in a drawer for another twelve months. We should be living it 24/7, and the fact that we don’t robs us of our confidence, our sense of worth. This – not currency, not Brexit, not pensions – is, for me, why the polls for independence aren’t at 80:20. We boast then we cower.

I see it at Burns Suppers. My theory is that the amount of tartan someone wears at these events is inversely proportionate to their likelihood of ever voting for the betterment of their own place of residence. I’ve sat at suppers next to people who spent most of the evening telling me how crap we were before getting to their feet and, with no apparent sense of self-awareness, extolling Scotland’s limitless virtue. There’s a reason I know cab firm numbers off by heart. Sometimes I can’t get out of there quick enough. Taxi for Ross.

Inevitably these folk can’t wait to tell you how proud they are to be Scottish. I used to wonder how anyone could claim that while denying Scotland the normality of self-governance enjoyed by every other functioning democracy.

But then I realised that, actually, they were proud. They were proud of a version of Scotland that sits down, shuts its mouth and knows its place. But a Scotland that stands up for itself and acts like a proper nation? That’s the version that horrifies them. They’re ashamed, mortified of that Scotland.

Which brings me to this weeks events.

What the Coronavirus outbreak has made crystal clear is that trust in leadership has never mattered more. Yet, in the UK government at least, never has there been so little of it. And it’s deeply ironic that a Prime Minister who spent much of the leave campaign denigrating experts and belittling them as the ivory tower dwelling, liberal elite now finds his political future utterly dependent on them. It seems we now can’t get enough of experts. Who knew?

Whatever ones politics, it’s hard to disagree that Nicola Sturgeon is playing a blinder. She’s calm, measured, honest and completely on top of her brief. The contrast with Boris Johnson could hardly be starker.

Which really seems to have annoyed people.

The reaction to the First Minister’s statesmanlike response to the health crisis hasn’t been uniformly negative. A GP called Dr Bahareh Heravi – one of those experts that we’ve had just about enough of, according to Michael Gove – wrote that “Nicola Sturgeon is articulating the matters so clearly that I feel it is much more detailed….than any other communication I have heard”.

To be fair, yesterday was perhaps the first time in history that the unionist opposition in Holyrood actually stood up for the First Minister and defended her right (and duty) to respond. Better late than never, but fair play all the same.

However, the usual suspects reacted with their usual toxic mix of anti-Scottishness, snobbery and just a whiff of old-fashioned misogyny. “Who the hell is Sturgeon to steal the British Prime Minister’s thunder?” seemed to be the agreed line (and she’s always “Sturgeon”. Boris is always “The Prime Minister”. Discuss).

She was accused of politicising the crisis, even though it was Johnson who had a childish – and unchallenged – dig at a Scottish health service performing significantly better than his own. “Borderline coup d’etat” wrote another, which conjured images of a tooled up Ms Sturgeon storming the doorway of Number Ten. One particular goon even stated that she had made such a high profile response to divert attention from the ongoing Alex Salmond trial. Which just proves that while there may yet be an antidote to COVID-19, there ain’t no cure for stupid.

On one level, it betrays a wilful and sadly common misunderstanding of what devolution actually is. Health is devolved. The First Minister is the head of a devolved government. Therefore it is not just entirely within her competency to lead on the matter, it would have been a grave dereliction of duty had she failed to do so.

The subtext seems to be: “this is too big and important for you. Get back in your box. Get on with the day job. Go back to Scotland and your wee pretendy parliament and concentrate on fixing potholes. The big boys will take it from here. There there. Eat your cereal”.

Which is a problem, because the head of the big boys is, when not hiding in a muckle big fridge, floating the idea of allowing the virus to spread, allowing some folk to die and then creating something called “herd immunity” – which sounds alarmingly close to Darwinism. I don’t want them running my country when it’s in the middle of a crisis. I don’t want them running it when it isn’t. Frankly, I wouldn’t let this lot run Stranraer bowling club.

But I think something deeper is going on.

Nicola Sturgeon – relatively young, intelligent, charismatic, female, diligent, hard-working, selfless, loyal, honest, conscientious – represents everything that her equivalent in Westminster isn’t. And her very existence is proof positive that Scotland has all the attributes to become a newly independent nation – should it wish to. She is a charismatic, talented leader with a guid conceit of herself, knocking it out of the park in the midst of an existential threat. Her presence renders every anti-independence argument redundant. She is therefore every British Nationalist’s worst nightmare.

The golf mind coach Bob Rotella always says that the one thing that unites us is that, regardless of whatever is going on around us, we can all choose how we think.

That’s hugely empowering. In the context of Scotland’s constitutional future, breaking down centuries of being told we’re too wee, poor and stupid to look after our own affairs and believing we are big enough, wealthy enough and smart enough becomes a self-fulfilling mindset. If we genuinely believe we’ll be independent, the rest is paperwork.

What Nicola Sturgeon did this week – and it really rattled the establishment cages – was act like she was already the leader of a confident new nation, comfortable in its own skin.

Once enough of us do the same, we’re there.

Oh, and wherever you are – tak tent o’ ither.