Ok hear me out, native American warrior (from an age before they really started to get to grip the idea they were each a different nation sadly) using all sorts of weapons from bows and arrows (which can be upgraded to exploding arrows) to sci fi super weapons, fighting cyborg dinosaurs in a inter dimensional crossroads? Sound interesting?

Released on the N64 (one of the launch titles in Europe and first game I owned on it) Turok Dinosaur Hunter was a game based around the relaunch of the comics that moved what had been a native American warrior who finds a hidden valley with dinosaurs, to Turok being a title held by a native American warrior who now defended the Lost Land, a sort or inter dimensional reality where things from multiple universes and worlds ended up. 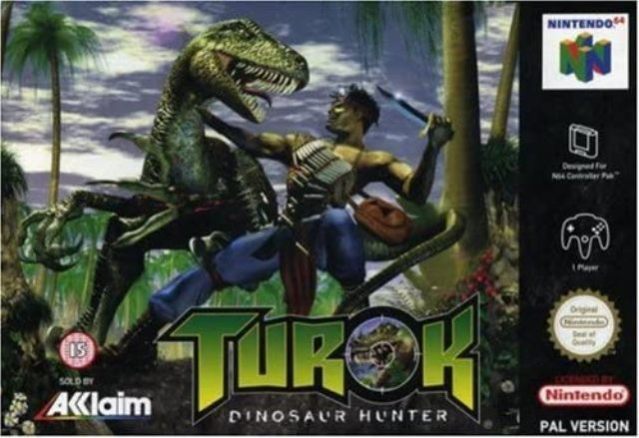 You play Tal’Set, the current Turok, as he must face the forces of the Campaigner an inter dimensional warlord who is out to claim the pieces of the chronoscepter, a powerful super weapon that was divided into multiple pieces to prevent it from ever being used. The Campaigner with his army, featuring hunters, ancient warriors, various monsters from the Lost Land, aliens (yes aliens) and cyborg dinosaurs (though not nearly enough I say to justify the title, mainly raptors, cause its always raptors) plans to find these parts, put the weapon together and placing it in a device in his stronghold break down the dimensional barriers so he can conquer the multiverse… or something they don’t tell you in the game.

Turok was one of the first real attempts at making a true first person shooter for games consoles rather than just a port of a pc one (and usually a bad port). As opposed to those early FPS games, Turok, is mainly played in outdoor areas such as jungles… in fact most of the games early sections are in jungles. That’s because of the way the game was made means there are a lot of reused assets for structures. The other thing you will notice is the fog. Often derivative its once again because of the limits of the game at the time so it held back view distance as to allow the game to run.

This game plays more like Doom in the sense it’s a run and gun game, you’re not really going to hide behind structures, and certainly not to regenerate health, no this was before that bad decision was made. Here if your health is low you have to get a health pick up. Also much like Doom, exploration is important. As well as the mandatory Keys to open up levels there are numerous secrets to find. These range from getting weapons earlier than you may think (I highly advise keeping an explosive arrow or shotgun shell ready in the second level to blow open the way to get the mini gun), other power ups like more heath or Tek Armour and the parts of the chronoscepter weapon which have one piece in every level.

The game has been released on current systems which has brought view distance improvements, though you can turn off that if you want a more authentic experience. But also means you can easily get a hold of it.

It’s quite mad honestly. Sure you start out fighting some hunters or tribal warriors, maybe a big green monster or raptor using a bow and arrow or shot gun at the start. But by the end of the game you’re firing a (profanity) fusion cannon at rocket launcher mounted triceratops’s in e Laval filled wasteland while demons (and yes they are called demons) throw fire balls at you, while the ROBOT FILLED CITADEL of the Campaigner looms in the background, where deep within you fight as the penultimate boss a cyborg fire breathing T.Rex that shoots lasers out of its eyes!

The game is not without its issues. Many people will cite the large amount of platforming as a problem. I find keeping the map overlay helps a lot with this problem for the most part (though not so much the Lost Land level the penultimate one). My main issues are that the first boss is A LOT more difficult than the last ones. Probably because he has 3 different health bars since first you have to beat two jeeps he summons before he just runs at you with hard to dodge attacks, so you have probably run out of your best ammo killing the trucks. The T.Rex’s attacks are easier to dodge and your arsenal is far larger by that point so he’s not as difficult. Also if you got all the pieces of the chronoscepter, the final boss goes down VERY quickly, but then thinks that as a reward for getting it.

That being said I do enjoy this game. While I never finished it without cheats (which is password locked so feel free to put them in after completing the game) since I was stuck in my home for weeks, I felt it was time to get that finished after over 20 years. At least when I put it onto normal difficult. When it was on hard I found I kept running low on supplies. You see enemies on all difficulties will respawn if you linger in certain areas. Not too much a problem on normal as they drop ammo and health, but on hard not only do they take more to go down, but also no drops… so yeah don’t play hard it’s just not any fun. But for everyone else I highly recommend this early entry into console shooters and fight as the most baddest FPS hero who isn’t the Doomslayer (I don’t see Master Chief fighting inter dimensional cyborg dinosaur armies)

and after all these years… beat turok proper #NintendoSwitch pic.twitter.com/Ab3nwJ0Ayl